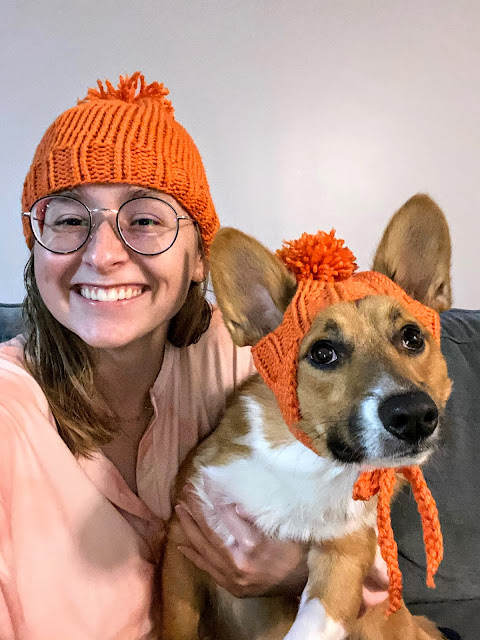 A few weeks ago, a good friend approached me about my knitting a hat for her dog. She sent me a picture that she saw on social media of a Corgi looking adorable in a hat, and decided her dog, Walter, needed one as well.

What I didn't tell her was that the picture she sent me was of a crocheted hat. Unfortunately, I do not know how to crochet, and, at this point, I don't think I'll ever learn (but who knows, I'm still young). I make this point because, in my opinion, crocheting is great for freeform-type projects like dog hats. Again, I am unfamiliar with crocheting, so I could be way off base here.

Knitting a hat for a dog was going to be a challenge, and I knew that from the very beginning. I spent weeks (okay with many days off in between) studying the picture my friend sent me trying to figure out just how I was going to construct this thing. Just when I thought I had cracked it, I noticed another part of the hat that I hadn't considered. I compiled quite a long list of measurements I needed of Walter to be able to construct this. Admittedly, I only actually used a few.

Finally the day came for me to sit down and knit the hat. As I started working, I realized it wasn't nearly as difficult as I thought it would be. In fact, I realized it was actually somewhat simple. I just had to do a little math and a little abstract thinking, but once I got going it was great. Each time I finished a section, I thought to myself "I should probably just quit while I'm ahead and give her a half made hat."

Next thing I knew, the hat was basically done. I don't know why I thought Walter's head was massive, but his hat ended up being very small. I was really nervous that it wouldn't fit him, but it fits like a glove (almost). My biggest fear was that my friend was going to receive the hat and it wasn't going to fit and I was going to let her down. That was absolutely not the case; she was so thrilled with the results. 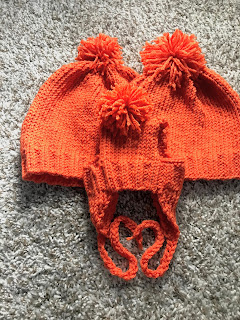 Even more exciting, I had so much yarn left over once I finished Walter's hat (because, again, his head really isn't that big). Obviously, I used the yarn to make matching hats for Walter's humans. I had just enough yarn to whip out two human-sized hats (although, they were a little snug). Now, when it gets cold, Walter's head will stay nice and warm, and so will his humans. When they take him outside, everyone will know who he belongs to and vice versa.

I used Red Heart Baby Hugs Medium. And I used all of the yarn. I mean all of it. There is nothing left, no scraps to speak of. I chose Red Heart Baby Hugs because it is recommended for baby items. I thought that would be good because I know dog skin can be very sensitive, and people are often told to use baby products on dogs because of this. This was my first time working with Red Heart Baby Hugs, and I really like it. It was so squishy and soft to the touch. I think it'll be great for a dog (or baby).

I'm not going to write up a pattern as this was very dog specific. However, I will include the materials I used, the measurements I used, and the general method of construction. 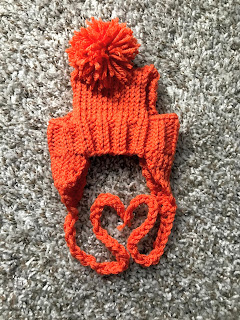 If you decide to knit a hat for your dog, please take a picture and tag me (@knitting_with_sara) on instagramt so I can see!
Happy knitting!

Popular posts from this blog

March 20, 2021
Wow! I really impressed myself with these joggers! This is without a doubt the the hardest thing I've ever knit. I have never knit pants before, and I wasn't following any pattern. I was, quite literally, making it up as I went. I don't want to pat myself on the back or anything, but I think these joggers turned out pretty darn nice! I'll take you on my journey of knitting the Braided Joggers. What better place to start than with the yarn. I won this yarn several months ago through a giveaway with Stylecraft Yarns. I had no idea what I wanted to do with it, but of course I was excited about free yarn! I picked this light blue because I thought it was pretty. This yarn sat in the corner of my room for months. It was just kind of mocking me because I didn't have a clue what to do with it. It is DK weight, which is lighter than the yarn I normally use. At first, I thought I was going to use the yarn to make a triangle scarf. I even bought some yarn to make a striped sc
2 comments
Read more

January 04, 2022
I first got the idea for a moody octopus from one of my good friends. She purchased several of them, and sent me pictures of all of them. I thought they were the cutest thing and wanted one for myself. I was all ready to ask her where she buys them when I realized I could just knit one for myself. I had seen many crocheted mood octopi, but I couldn't find any knit patterns. It didn't appear to be a hard shape, so I decided I would just figure it out as I go. I knew I wanted to use colors that I already had in my stash (because why not bust the stash while I'm at it). Most of my yarn is worsted weight acrylic yarn, so that made deciding on size and material super easy. I'm not sure what brand of yarn it was as this particular yarn was actually gifted to me from a friend whose grandmother no longer knits. I ended up making two prototypes and found that stiffer yarn provides more structural support. This was also a fun little knitting adventure as it was my first time us
Post a Comment
Read more

Sara
Tag along on my knitting journey! I have been knitting on and off since 5th grade. I am excited to share my love of knitting with the world!